How difficult it will be to track each and every part manufactured from a production line? How messy would be the scene when all the cabs are parked outside the airport blocking the traffic? But here we have RFID tags which have made our life easier. From industrial workshops to shopping malls we have their presence everywhere. Now these tags have made our life even easier with Govt. of India planning to make use of RFID tags to collect taxes after GST.

What is Radio- Frequency?


A radio frequency (RF) signal refers to a wireless electromagnetic signal used as a form of communication. RF waves occur naturally from sun flares, lightning, and from stars in space that radiate RF waves as they age. Humankind communicates with artificially created radio waves that oscillate at various chosen frequencies. RF communication is used in many industries including television broadcasting, radar systems, computer and mobile platform networks, remote control, remote metering/monitoring, and many more. A radio-frequency identification system uses tags, or labels attached to the objects to be identified.

Let’s know what RFID actually is and its working using an example -:

Consider a workshop which produces parts of a car, so we have to make the input (steel bar) pass through 10 machines to make it a finished part . We have to produce hundreds of such parts everyday and just imagine how difficult it would be to keep track of each and every part every time it passes through a machine, just attach a RFID tag and you will have to do nothing but just to check your computer to track the part and its details.


Yes, RFID uses electromagnetic frequencies to transfer data from a tag to a receiver. Here when we attach RFID tags to our parts, the tag stores information such as the part name, part no. and other info and we have receivers which tap the info and store it in the computer.

The first patent to be associated with the abbreviation RFID was granted to Charles Walton in 1983. Surprisingly RFID was used during WW-2 to identify weather the aircraft were friend or foe.

Some common uses of RFID are-: 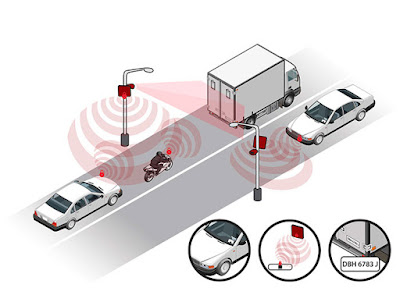 The E- Way bill to hit markets by October

The GST council has introduced the E-way bill system a electronic way bill for movement of goods which can be generated on the GSTN (common portal). A ‘movement’ of goods of more than Rs 50,000 in value cannot be made by a registered person without an e-way bill. When an e-way bill is generated a unique e-way bill number (EBN) is allocated and is available to supplier, recipient, and the transporter


Once the supplier has paid the tax, he obtains a E-way bill and a RFID tag that has the information about the supplier, supply, cost and taxes. The obtained tag is now fixed to the vehicle and the historic and tiring blockages in the inter- state borders are now eliminated, once the vehicle passes through a receiver the data related to the goods it carries is transferred to a computer and the waiting time is eliminated.

So, we can see how RFID has changed the way a logistics business works by providing the position of the goods supplied. This would not just give the current information about the goods being transported but also provide a sense of comfort to the suppliers who were also worried about the goods they were earlier supplying.

Note: The views expressed here are those of the author’s and not necessarily represent or reflect the   views of DoT Club as a whole.