Wi-fi -The Form of Electricity through Rectennas

Ever thought that connected to a Wi-fi network would be a rather become more helpful without thinking of the battery draining out with the continuous usage. Well, that is a myth that we used to believe but now it is not.

Researchers from MIT and elsewhere have designed the first fully flexible, battery-free “rectenna” — a device that converts energy from Wi-Fi signals into electricity — that could be used to power flexible and wearable electronics, medical devices, and sensors for the “internet of things.” (Image source: MIT/Christine Daniloff)

Researchers at MIT have developed a new flexible device that can convert the Wi-Fi signals into electrical power that can power electronic devices like laptop, mobiles, etc. MIT scientist made a device from flexible, inexpensive that powers electronics devices, medical equipment and wearable devices. These devices that convert AC electromagnetic waves into DC electricity are known as “rectennas.” This is a two-dimensional flexible device that is powered solely by Wi-Fi waves passing through it.

All rectennas consist of a component known as a “rectifier,” which converts the AC signal into DC signal. The researchers used a 2-D material known as molybdenum disulphide (MoS2), which is three atoms thick, is one of the thinnest semiconductors present in today world. As the WIFI signal hits the antenna, it picks up the electromagnetic radiation, converting it directly into an alternating current, and then it is passed through a diode, which converts the signal to direct current for use in electrical circuits. It can capture higher frequencies than other flexible rectifiers, which can't capture the gigahertz frequencies in which Wi-Fi signal operates.  The devices are flexible and it can be fabricated in a roll-to-roll process to cover very large areas.

Researchers have demonstrated a new rectenna that uses a flexible radio-frequency that captures electromagnetic waves carrying Wi-Fi signals as AC waveform. It has a novel device made out of a two-dimensional semiconductor just a few atoms thick which is connected with an antenna which receives the ac waveform and converts them into dc signals which powers the electronics devices.

“What if we could develop electronic systems that we wrap around a bridge or cover an entire highway, or the walls of our office and bring electronic intelligence to everything around us? How do you provide energy for those electronics?” said Tomas Palacios, a professor at Massachusetts Institute of Technology (MIT) in the US.

The report suggests that the maximum output efficiency for the current device stands at 40%, depending upon the input power of the Wi-Fi signal. At the typical Wi-Fi power level, the power efficiency of the rectifier is about 30% i.e. it can produce about 40 microwatts of power when exposed to the typical power levels of Wi-Fi signals (around 150 microwatts). The power generated is more than enough power to light up a simple mobile display or silicon chips. Today’s rectennas made from rigid, more expensive materials that are able to achieve around 50 to 60 % efficiency. The team is planning to build a more complex system and improve efficiency.

The device could also be used for practical use like medical implants and swallowable sensors.

These sensors can also be used to harvest energy from the environment to power up the small labs inside the body and communicate data to an external computer.

The development team says the as molybdenum disulphide (MoS2) rectifier can capture and convert up to 10 GHz of wireless signals with an efficiency of about 30 %. This is much higher than other flexible designs available, and the researchers also say that it is faster as compared to other devices.

NOTE: The views expressed here are those of the author's and not necessarily represent or reflect the views of DOT Club as a whole
By DoT Club - September 22, 2019 2 comments:

RERA (Real Estate and Development Authority) Act 2016, a bill passed by the Modi government with the sole objective of establishing a Real Estate Regulatory Authority for the regulation real estate sector. The act ensures the sale of plots, apartments, buildings and setting up of a tribunal for grievance redressal and to set up rules and regulations of the regulatory body. As per the present scenario, the real estate sector is experiencing a massive slowdown, therefore RERA Act and the infusion of Technology can be fruitful in reviving this particular sector. Focus on technology is imperative because it is the key driver for growth in all spheres. 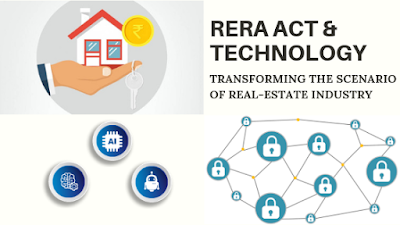 The adoption of technology has been very late in the real estate sector but has made it easy and attractive with the help of advancements and innovation. As the government aims towards a five trillion economy, the real estate sector plays a pivotal role in it. According to IBEF reports, the real estate sector in India is expected to reach US$1 Trillion by 2030 and by 2025 it will contribute 13% to the GDP. The fact that this sector holds a market size $150 Billion still has tremendous growth ahead and eventually will become the major player in the contribution of the GDP of the country.  As far as technology is concerned it has made the way simpler for the people as it can meet its customers within seconds. The conventional method of using paperwork for all invoices, transactions done have now been converted to a digitalized platform. Technology has increased the quality standards of the construction and has tremendously reduced the construction time of a project. Developers have started using a common platform which brings the developers and customers together were buying of properties has become smoother. Focusing on various technologies that are used or can be used in this industry.
⮚Blockchain Technology:
Though India has not been fully operational in adopting the blockchain technology still there are various opportunities in this sector. It will bring transparency and increase the efficiency of India's Real Estate sector. It enables safer and faster transactions with minimal intervention. It makes buying and selling more convenient by removing the intermediaries.
⮚Internet of Things:
Today IoT has hugely penetrated the real estate industry at a building level. It has made the lives of people simpler. People having home appliances, security cameras, etc. can now control it via the internet. People can also use this technology for energy saving.
⮚Process Automation:
The larger player has been using ERP (Enterprise Resource Planning) system for a long time but due to process automation affordable ERPs using SaaS subscription model are being made available. This prevents the players from spending large capital costs in the development of ERPs.
⮚ Augmented Reality (AR):
It uses a computer-based model to visualize what the project/construction will look like upon completion. So it allows developers to make corrections before the construction starts in this way they can eliminate the flaws in the project.
Artificial Intelligence is considered as the major technology in shaping the Real Estate future. Also, it is the radical and groundbreaking technologies set to transform the market shortly. Ways in which AI is modifying the real estate sector are:-
1. Chatbots: They have penetrated every aspect of our lives. When it comes to Real Estate they have revolutionized the selling and buying activities, chatbots have proved itself in saving time, cost-cutting and saving additional resources. Introduction Chatbots in websites have optimized the time spent on common queries.
2. Construction Automation: Some tools have been developed to provide good quality materials at cheaper price from suppliers. Robots have been deployed to handle materials used for construction which cuts down the cost and triggers profit by extensive use of AI.
3. Drones: Another next-gen technology is drone. It has become a new medium for developers to build houses in a cost-effective, faster and safer manner. They have been fitted with high-resolution cameras so that inspection becomes easier and pics can be taken at different stages.
4.Investor Analytics: An intellectual robot can check the revenue and growth goals set by the property investors and can also, evaluate the risk based on investor's parameters that they can make necessary modifications for which they can meet their monetary goals.
Real Estate sector was traditionally functioning offline but when advancements came and technology was embraced in this sector it led into a scalability impact in various markets. Now technology integrates two polarised part which existed in isolation before like search and discovery platform thriving in the country and the fragmented brokerages, retailers. What tech does is it consolidates them and bring them to a common platform.

So what technology means when it comes to the Real Estate sector, the answer is it builds affordable houses, modular homes and creates an efficient process to build projects. Finally, the sole objective remains that how to build low-cost houses or how you can use technology to achieve that target.


When it comes to RERA Act, it is also very imperative for this sector by introducing Regulatory body for grievance redressal, speedy recovery of cases which will ease the problems of people and builders would be able to get occupancy certificate early if they are eligible for. I think both the RERA Act and the use of tech in the Real Estate industry is very important for the revival of the slowing industry as it will eventually help in the growth of the economy of our country.

NOTE: The views expressed here are those of the author's and not necessarily represent or reflect the views of DOT Club as a whole
By DoT Club - September 09, 2019 No comments: