Sky is not the limit anymore !

Zara the clothing brand that encourages occasional stock outs in its retail outlets has a responsive supply chain.The point here is Zara has responsiveness as its competitive strategy i.e. it differentiates itself by responding to its customer’s needs in the least possible time. It doesn’t mind spending,investing on solutions that increase the degree of responsiveness. Hence Zara has a supply chain where everything from information to finished goods flows in the least possible time. ZARA’s retail stores get new stocks every fifteen days and the information from the retail outlets flows to the headquarters in real time.Hence the definition goes “Responsiveness can be defined as the ability of the supply chain to respond purposefully and within an appropriate time frame to customer requests or changes in the marketplace.”

Walmart is in news after it brought 77% stake in Flipkart for $16 billion. Its tagline “Everyday low prices” is self-explanatory. Walmart with efficiency as its competitive strategy aims to do the best in the least possible cost so as to pass the benefits to its customers. Walmart tries to cut costs in each & every stage of its process flow and hence it adopts an efficient supply chain system that aims to get maximum outputs at minimal costs. Hence the definition goes “An efficient supply chain gets your products to their destinations in the most cost-effective way.”

Amazon has its supply chain designed in such a way that it’s the customers who decide the nature of the supply chain to be followed by a firm. As we are already aware of its efficiency i.e. amazon.com and its responsiveness i.e. amazon prime here is the amazon prime air that will shift the paradigms of the existing supply chain systems.

What is amazon prime air?
Amazon to speed up its shipping services by using drones that could deliver your products within hours of ordering has announced the launch of its experimental delivery system amazon prime air in the year 2013. Despite of the skepticism & criticism the top management continued to invest in its R&D activities. Following the negligent behaviour of the FAA (Federal Aviation Administration) amazon set up its new R&D center in the UK which became operational in 2014.

The challenge that amazon had to face initially was this super speed delivery would only be possible if the recipient stays nearby an amazon warehouse, this would rather limit the number of users who can use this facility and also puts a limit on the type of products for which this facility could be used. Secondly, FAA set up new drone regulations in the year 2015 which stated UAV’s would only be allowed if they are in the sight of the pilot and banned the flying of drones over people who had no connections with the drone’s purpose.

Amazon on the other hand came up with a solution for the first challenge by setting up of “Airborne fulfillment centers” which will act as airports kind of warehouses for the drones and it patented the above mentioned concept. It also decided to use high-lofted mountings such as street lights and cell-towers as “docking centers” where the drones will rest when not in use & delivery would be carried out by the parachutes. The second challenge was neutralized with FAA allowing amazon to test its drones at a distance 20,000 feet from USA’s border in Canada.

After the challenges and FAA loosening its rules for UAV’s and allowing the use of drones for commercial purpose even if it is not in the sight of the pilot Amazon Prime Air served its first customer in the United Kingdom in December 2016 when a customer at Cambridge was delivered a product by a drone. It took around 13 minutes for the delivery.

This decade where the supply chain systems have undergone a transformation with the help of technology is really an interesting subject of study. This ultimate concept which will soon be a part of the existing supply chain will create a new degree of responsiveness for firms. The major question here is like quality, responsiveness also comes with price and will the customers ready to pay the super-premium prices?? Will this concept be feasible for every location and how will amazon overcome the loopholes and possibilities of secure delivery? Nevertheless, necessity is the mother of invention and this applaudable transformation of the supply chains do have the potential to act as a competitive advantage and increasing revenues of the firms substantially. In the Indian context this transformation will happen not immediately but definitely.

Note: The views expressed here are those of the author’s and not necessarily represent or reflect the views of DoT Club as a whole.
By Unknown - June 24, 2018 No comments:

Artificial Intelligence vs Machine Learning vs Deep Learning vs Data Science vs IoT? Are they the same or different?

We’re all familiar with the term “Artificial Intelligence.” After all, it’s been a popular focus in movies such as The Terminator, The Matrix, Transcendence etc. But you may have recently been hearing about other terms like “Machine Learning”, “Deep Learning”, “IoT” and even “data science”, sometimes used interchangeably with artificial intelligence.

Artificial Intelligence (AI) in layman terms, enables a computer to think and take decisions accordingly. John McCarthy, who is known as the father of Artificial Intelligence first used the word AI in 1956 Dartmouth Conference, the first artificial intelligence conference and said “AI involves machines that can perform tasks that are characteristic of human intelligence”. In general, it includes things like planning, understanding language, recognizing objects and sounds, learning, and problem solving.


We can put AI in two categories, weak AI and strong AI. Weak AI (also known as Narrow AI) exhibits some facet(s) of human intelligence, and can do that facet extremely well, but is lacking in other areas. A machine that’s great at recognizing images, but nothing else, would be an example of narrow AI. All currently existing systems considered artificial intelligence of any sort are weak AI at most. Applied AI also comes under weak AI. Siri is a good example of narrow intelligence and applied AI. Siri operates within a limited pre-defined range, there is no genuine intelligence, no self-awareness, no life despite being a sophisticated example of weak AI. Whereas a Strong AI develops artificial intelligence to the point where the machine's intellectual capability is functionally equal to a human's. The ideal Strong AI machine, would be built in the form of a man, have the same sensory perception as a human, and go through the same education and learning processes as a human child. Essentially, the machine would be "born" as a child and eventually develop to an adult in a way analogous to human development. Some of you may have heard of a TV series known as ‘Person of Interest” which showcased the capability of a strong AI and what It can do.

Deep learning is a subset of machine learning and has taken shape since 2006. It uses artificial multi-layer neural networks. Neural Networks are inspired by our understanding of the biology of our brains – all those interconnections between the neurons. But, unlike a biological brain where any neuron can connect to any other neuron within a certain physical distance, these artificial neural networks have discrete layers, connections, and directions of data propagation. To put it in simple terms, deep learning is inspired by the structure and function of the brain, namely the interconnecting of many neurons and Artificial Neural Networks (ANNs) are algorithms that mimic the biological structure of the brain.


Deep Learning has enabled many practical applications of Machine Learning and by extension the overall field of AI. Deep Learning breaks down tasks in ways that makes all kinds of machine assists seem possible, even likely. Driverless cars, better preventive healthcare, even better movie recommendations, are all here today or on the horizon.

Data Science is an interdisciplinary field of systems and processes to extract information from data in many forms. It covers a wide array of data-oriented technologies including SQL, Python, R, etc. It also makes extensive use of statistical analysis, data visualization, distributed architecture, etc. In simple terms, data science is the extraction of relevant insights from data by using various techniques from many fields like mathematics, machine learning, computer programming, statistical modelling, data engineering and visualization, pattern recognition and learning, uncertainty modelling, data warehousing, and cloud computing. Data Science does not necessarily involve big data, but the fact that data is scaling up makes big data an important aspect of data science.

There’s a lot of noise at the moment about the Internet of Things (or IoT) and its impact on everything from the way we travel and do our shopping to the way manufacturers keep track of inventory. But what is the Internet of Things? The Internet of Things (IoT) is the network of physical devices embedded with electronics, software, sensors, actuators, and connectivity which enables these things to connect and exchange data, creating opportunities for more direct integration of the physical world into computer-based systems, resulting in efficiency improvements, economic benefits and reduced human intervention.


In layman terms, the Internet of Things is the concept of connecting any device to the Internet and to other connected devices. The IoT is a giant network of connected things and people – all of which collect and share data about the way they are used and about the environment around them.


The relationship between AI (which includes ML and DL) and IoT is much like the relationship between the human brain and body. Our bodies collect sensory input such as sight, sound, and touch. Our brains take that data and makes sense of it, turning light into recognizable objects and turning sounds into understandable speech. Our brains then make decisions, sending signals back out to the body to command movements like picking up an object or speaking. Similarly, all of the connected sensors that make up the Internet of Things are like our bodies, they provide the raw data of what’s going on in the world. Artificial intelligence is like our brain, making sense of that data and deciding what actions to perform. And the connected devices of IoT are again like our bodies, carrying out physical actions or communicating to others.

The opportunity that lies -


Those who still have some doubts left about the differences, an over simplified definition of these terms are as follows – 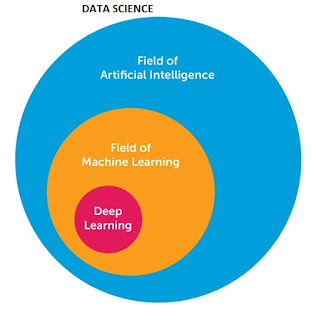 
Note: The views expressed here are those of the author’s and not necessarily represent or reflect the views of DoT Club as a whole.
By Sumeet - June 17, 2018 5 comments: