IA(Intelligence Amplification) is sometimes contrasted with AI (artificial intelligence), that is, the project of building a human-like Intelligence in the form of an autonomous technological system such as a Computer or Robot. AI has encountered many fundamental obstacles, practically theoretical, which for AI seem moot, as it needs technology merely as extra support for an autonomous intelligence that has already proven to function.

The terms “intelligence augmentation” and “intelligence amplification” portrays images of human beings with a computer chip embedded in their skulls or an outfit/device that is attached to their skull/heads. IA does not need to understand the human brain except for extreme enhancement. It can be a user interface issue, Gradual acclimatisation, and Effective intelligence might be more relevant than “real” intelligence

1) Natural language Generation (NLG) - NLG is one of the disciplines of Intelligence Amplification that converts all types of data into human-readable text. This software converts data into the text at a very rapid pace, enabling machines to communicate effectively. NLG software has the ability to convert large quantities of data, identify unique patterns and share the information in such a way that it will be easy for human beings to understand. This software is especially used for producing news and other time-sensitive stories which require a very high speed for publishing on the internet

3) Virtual Agents - A virtual agent is basically a computer agent or program that is capable of interacting with humans.

6) Emotion Recognition - This technology allows the software to “read” the various emotions on a human face by using advanced image processing or audio data processing. We can capture “micro-expressions,” or subtle body language cues defines a person’s feelings.

IA is playing a very important role in our daily lives and also help solve immensely difficult issues in various industries, such as entertainment, education, health, commerce, transport and utilities. IA applications can be grouped into four categories are reasoning, Knowledge, Communication, and Perception.

IA has some kind of search algorithm in the background to accomplish their tasks.

The search problem consists of

The search algorithms have no such additional information on the goal node other than the one that has been provided in the problem definition. The plans are to reach from start state to the goal state differ only by the order and/or length of actions. Uninformed search is also called Blind search. The following uninformed search algorithms are discussed in this section.

1) Depth First Search - Depth-first search (DFS) is an algorithm for traversing or searching tree or graph data structures. The algorithm starts at the root node and explores as far as possible along each branch before backtracking.

2) Breadth-First Search - Breadth-first search (BFS) is an algorithm for traversing or searching tree or graph data structures. It starts at the tree root and explores all of the neighbour nodes at the present depth prior to moving on to the nodes at the next depth level.


The algorithms have information on the goal state, which helps us in more efficient searching. This information is obtained by a method known as Heuristic.

2) A* Tree Search - A* Tree Search, or simply known as A* Search, combines the strengths of uniform-cost search and greedy search.

3) A* Graph Search - A* tree search works well, except that it takes time re-exploring the branches it has already explored.

NOTE: The views expressed here are those of the author's and not necessarily represent or reflect the views of DOT Club as a whole

The future of ‘standard’ medical practice might be here sooner than anticipated, where a patient could see a computer before seeing a doctor. Through advances in artificial intelligence (AI), it appears possible for the days of misdiagnosis and treating disease symptoms rather than their root cause to move behind us. Think about how many years of blood pressure measurements you have, or how much storage you would need to delete to fit a full 3D image of an organ on your laptop? The accumulating data generated in clinics and stored in electronic medical records through common tests and medical imaging allows for more applications of artificial intelligence and high-performance data driven medicine. These applications have changed and will continue to change the way both doctors and researchers approach clinical problem-solving.

Machine Learning has made great advances in pharma and biotech efficiency. Some important applications include:

Diagnose Diseases: Correctly diagnosing diseases takes years of medical training. Even then, diagnostics is often an arduous, time-consuming process. In many fields, the demand for experts far exceeds the available supply. This puts doctors under strain and often delays life-saving patient diagnostics.

Developing Drugs Faster: Developing drugs is a notoriously expensive process. Many of the analytical processes involved in drug development can be made more efficient with Machine Learning. This has the potential to shave off years of work and hundreds of millions in investments.

Personalize Treatment: Different patients respond to drugs and treatment schedules differently. So personalized treatment has enormous potential to increase patients’ lifespans. But it’s very hard to identify which factors should affect the choice of treatment.

Improving Gene Editing: This technique relies on short guide RNAs (sgRNA) to target and edit a specific location on the DNA. But the guide RNA can fit multiple DNA locations – and that can lead to unintended side effects (off-target effects). The careful selection of guide RNA with the least dangerous side effects is a major bottleneck in the application of the Clustered Regularly Interspaced Short Palindromic Repeats (CRISPR) system.

IBM Watson Health: Healthcare set up as a service to bring A.I.’s helping hand to stakeholders within the healthcare sector from payers to providers. With the power of cognitive computing, Watson Health has aided several renowned organizations like Mayo Clinic with its breast cancer clinical trial and Biorasi to bring drugs to the market faster while slashing costs by over 50%.

Oncora Medical: The Philadelphia-based start-up aims to help cancer research and treatment, especially in radiation therapy. One of its co-founders, David Lindsay, was doing clinical work as an M.D./Ph.D. student at the University of Pennsylvania, when he recognized that radiation oncologists had no integrated digital database that collected and organized electronic medical records. So he decided to build exactly that: a data analytics platform that can help doctors design sound radiation treatment plans for patients. 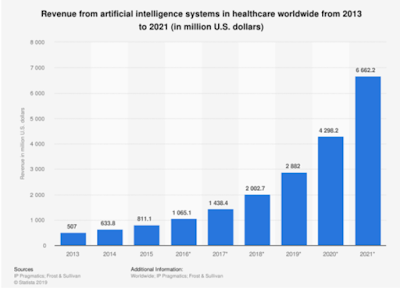 AI is already helping us more efficiently diagnose diseases, develop drugs, personalize treatments, and even edit genes. But this is just the beginning. The more we digitize and unify our medical data, the more we can use AI to help us find valuable patterns – patterns we can use to make accurate, cost-effective decisions in complex analytical processes.