One such project Google is working on is Project Loon. It is appropriately named Loon because it involves balloons. Google has developed this innovative project to solve the global problem that the internet network is still out of reach for one-third of the population. The balloons are placed in the stratosphere cautiously by adjusting their altitude to around 20 km, twice as high as the weather changes, and the airplane flights create an aerial wireless network.

There are many places where Internet service is not in existence or the people living there can’t afford what is available. The Internet network has changed the mode we communicate, run businesses, learn, govern and exchange ideas.

Despite the increase in the number of people using the internet from 2.2 billion in 2011 to 3.2 billion in 2015, around 4 billion people do not have access to the Internet network.

According to Google, each balloon provides an internet connection that covers the balloon and an area of about 25 miles (40 km) in diameter simultaneously. Since the beginning of the project, the Loon team has also increased the data speed by ten times so that they expect the coverage to be comparable to the rate of a typical 4G LTE network. Mike Cassidy, the head of Project Loon, stated that his balloon network covers up to 5,000 square km (1,931 square miles) on the ground and provides services at 15 megabits per second on the phone.

The three main components in Loon design are

3.     Electronics: A small electronics box is, placed below the inflated envelop. This box contains the following:

·       Circuit boards to control the systems

·       Sensors to record weather conditions and monitor them 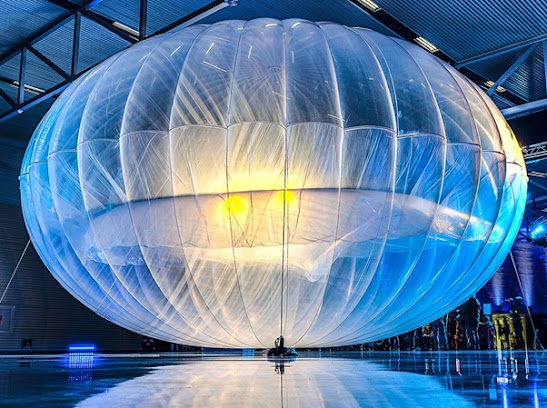 Launching the balloons that have never existed before created a problem for the team, but later they worked on it and made it possible. There are two chambers of the balloon, the inner one consists of air, and the outer one consists of helium. The balloon goes down if there is air in the inner balloon that increases the mass, and by releasing the air, it goes up. Previously many balloons burst or didn’t stay up very long. So, the google team designed and custom-built auto launchers like large cranes capable of filling the balloons every 30 minutes into the stratosphere. With these changes, the balloons withstand at least more than 100 days in the stratosphere.

·       First, a dedicated Internet antenna on the ground sends a signal to the balloon network, then sends the signal from the balloon to adjacent balloons.

·       The signal from the balloon arrives at a ground station connected to a local Internet provider or a pre-existing Internet infrastructure that provides services through the balloon network.

·       The pre-existing internet service provider or internet infrastructure sends the response back to the balloon, further transmitted over the balloon network. 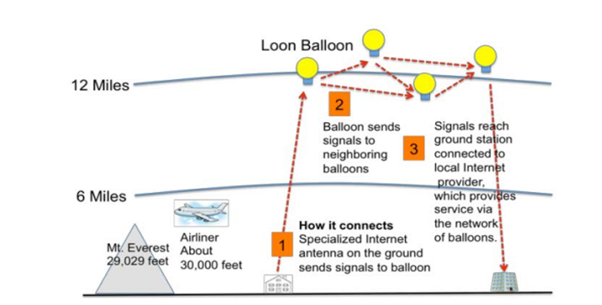 Google wants to build a network without borders. The biggest obstacle is not technology, but some countries are not permitting this project. In addition to the license, Google should also negotiate with those countries to purchase or borrow specific radio frequencies.

Getting everyone on the planet online will also benefit Google, which relies heavily on revenue from online advertising and services. Similarly, the company will receive payment for access to the Loon network.

Facebook’s Drones is an idea that competes with Google Loon. Compared with balloons, each drone provides 4,444 larger coverage areas, higher Internet speed, and can stay in the air for several years (about five years). But it requires expensive equipment, so when it fails and falls from the sky, it may cause extreme damage. The main problems with the use of drones are data security and privacy.

Loon is handing over connectivity to groups where the communications infrastructure has been broken or wiped out. In 2017, Loon partnered with Telefonica to offer primary net connectivity to a broad spectrum of people throughout Peru.

more than 20,000 human beings in Puerto Rico after Hurricane Maria created natural calamities. In 2020, Loon started handing over the business carrier in Africa.

Ø  Project Loon helps and guides the farmers about important weather data whose harvests are affected by droughts.

Ø  Floods, diseases, famine, illiteracy could be dealt with swiftly with this project.

Ø  The materials used in this project are affordable and are advantageous to connect with the world.

Ø  Nearly more than 50% of the comments are in favor of this project. In the future, we hope that these balloons could become an option for connecting underserved, remote, and rural areas that help with communications after natural disasters.

Ø  OUTERNET WILL SOON REPLACE THE INTERNET