Is EdTech the key of revolution for future education?

The classroom teaching has seen shift in its role from past few years. Now the main target has moved faraway from memorizing textbooks to learning critical thinking, collaboration and digital literacy. To make sure workforce preparedness, it's not enough to vary WHAT we’ve been taught at schools. It’s time to think about HOW teaching standards can be improved at schools and educational institutions. 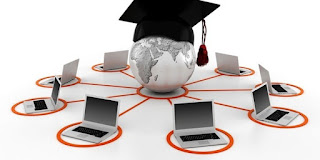 EdTech also called as EduTech refers to integration of technological hardware, software and theories of education and practice to ease learning. Job of EdTech is to create, use and manage process of technological aspects and academic resources to assist and improve user academic performance. Goal of EdTech is to bring learners, teacher, and technical means together in an effective way. 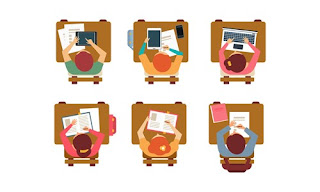 Ever since computers began appearing within the back of classrooms within the early 1980s, technology in education has changed from an independent activity station to a necessary a part of teaching and learning within the 21st century. Back in time when iPad was launched in 2010, it changed the way students learnt things and communicated globally.

In past few years, the app store began to experience a rise in creation-based applications available to students. Suddenly, the priority of finding educational games for the iPads began to shift towards finding opportunities for college kids to make, design, collaborate and present using their iPads. Teachers began to understand that students not required one ICT skills-based lesson periodically, but needed to start to use these devices in meaningful authentic ways, within all subject areas. 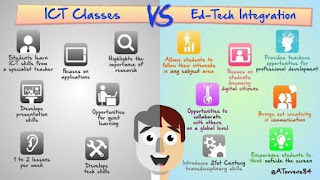 A educational institution's use of technology in its curriculum may depend upon what percentage devices it's access to, the kinds of devices and therefore the level of experience found within the varsity environment. ICT classes work best when a faculty is introducing new devices and practices into the curriculum while a totally immersive Ed-Tech Integration Model could also be more suitable when students and teachers are well experienced with basic ICT skills. Shifting from ICT Classes to an Ed-Tech Integration Model demands extensive collaborative planning, knowledge of the firm's curriculum and a willingness to embrace changes from all involved, but once done, it can result in enhancement in efficiency of a learner and teaching efficiency of a teacher.


How can EdTech bring change in future of education?

With less number of teachers to teach and more number of  students to learn leading to more workload for teachers and only a simple blackboard and projector at the teacher’s disposal, to be able to curiosity for learning among students is often a difficult task.

But by using the right digital tools, Educational technology can take learning to the next level; from the lifeless papers of textbooks to engaging experience of virtual reality and simulation programmes; from learning based on instructions to study by technological games to foster better engagement.

We're in 2020 and that we all are documented about how AI can play an excellent role in competency based adaptive learning. It can automate the e-learning feed, create recommendations supported individual learning history and actually help students to settle on future career supported data regarding their brain of varied subjects.

At an equivalent time, upon analysing student’s data, teachers can set the curriculum to match each student’s capability and pace of learning. This will lead in making once far-fetched dream of personalized learning possible.

c)     Provision of on demand learning

There are various platforms which provide on demand learning for day to day education or specific specialized course you want to opt for, platforms like BYJU’S, COURESERA, LinkedIn Learning, YouTube etc have shined out to be few among those platforms which believe EdTech can act as bridge for effective education among teachers and students.

d)    Drastic change in Role of Teachers and Students in classroom

As we are talking about improvement in educational system through implementation of various technological tools like artificial intelligence, augmented reality, virtualisation of things, role of teachers and students may see drastic change as earlier methods of teaching will be getting off the track and EdTech will help improvising things by boosting attention of students, reducing workload of individual teacher, improving efficiency, providing insights to improve students’ performance based on real-time data.

Learning can definitely be made more interactive and interesting for students with right use of educational technology, but we must also understand that longer screen time alone will never be sufficient to make sure better learning. It must be supplemented by enthusiasm and a passion for learning among students. Technology can just act as a bridge for a learner to steer thereon and learn and improvise his/her efficiency and help bringing productivity within the real tie work which a individual learns in his/her phase. That Being said EdTech is a gamechanger for people willing to learn things in faster and better way.

The quantum computing we can harness the super powers, super position and entanglement to solve the complex problems that our classical computers cannot do. Thus a quantum computer uses the quantum phenomena of subatomic particles to the compute complex mathematical problems. 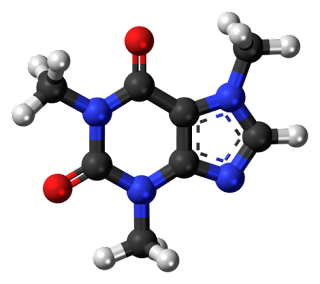 A quantum computer uses qubits to supply information through the system. It’s encoded with quantum information in both states of 0 and 1 instead of classical bits which can only be 0 or 1. This means a qubit can be in multiple places at once due to the superposition.

Suppose the example, I write X on a random page in a library book with 1 million books and tell a quantum and classical computer to find the X. For a classical computer, it would have sort out through every page of every book one by one to find the X which would consume a lot of time. For quantum computer, a qubit in super position can be in to a multiple places  once so that  it can be analyze every page at the same time and find the an  X instantly. 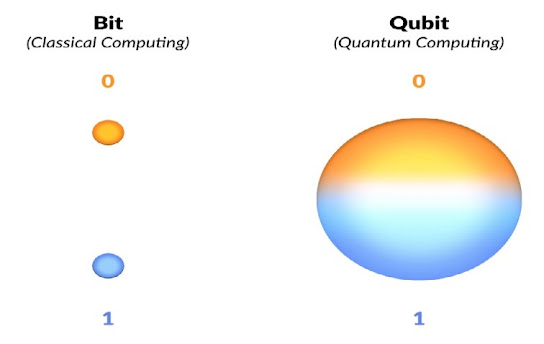 The advantages of Quantum Computing

Such algorithms are not easy to formulate, it take time and research and development (R&D) effort and resources to discover what work , famous example for one of the algorithm is the quantum factorization algorithm created by the Peter Shor of AT&T Bell laboratory. What the algorithm do is tackles the problem of factorizing of large numbers into its prime factors. And this task is classically very difficult to solve (based on current technology). Shor algorithm cleverly used effects of quantum parallelism to give results of prime factorization problem in the matter of second whereas classical computer would take, in some cases, more than the age of universe to produce a result! (You can notice that no  technology, but also we  require new break  through algorithm and we do require other supporting technology such as leverage of machine learning (ML), artificial intelligence (AI), Big Data, Cloud Computing to accelerate Quantum Computing development. Above the   example, we can get a lot from the various news, since the world is to keep evolving.

The disadvantages of Quantum Computing

First thing first, it is cost.  IBM recently show cased their first commercial Quantum Computing solution, ,it’s to make viable sense to offer as “subscription” basis base on the use of the case in demand only.  The Quantum Computing, really achieved the critical mass of adoption, it take a long time for all cost variable become reasonable, then we can see how Quantum Computing revolution the current mass technology. So, it make sense to be aware that is coming, but may or may not necessary to heavy invest on it yet.

The Process of Utilizing Quantum Computing:

·       Activate qubits to reach a superposition’s of all possible states.

·       Encode the optimization problem by applying a phase on each superposition state.

·       Use methods of interference to cancel or add phases to optimize for the correct answer and shrink the wrong answers (like noise canceling in headphones).

·       Quantum mechanics are the laws of subatomic particles with phenomena’s such as quantum tunneling, superposition and entanglement.

·       Quantum computers helps in solving of optimization problems which can revolutionize drug discovery and etc.