What comes in your mind when you hear the word ‘sports’? Well, probably athletic people in their Jerseys, teams with trophies or your favourite player. If you agree, perhaps you are myopic, because, just like we say ‘there is something more than meets the eye’ in the case of sports, it is the conspicuous presence of technology.


As of today, technology can track the trajectory of a ball and display a record of its statistically most likely path as a moving image; this is named the Hawk-Eye system. It has now been accepted as an impartial second opinion in sports and has also been accepted by governing bodies for Tennis, Cricket and Football. We say this is the technical era, but technology’s occupancy in sports dates back to the 19th century. In the early 1936, Electrical scoring system was introduced. Some years later the first use of instant replay took place during a Canadian broadcast and soon became a key technology for officials. Referee microphone, chip timing, pitch tracking and so many more inventions followed. Hawk-Eye was developed in the UK by Paul Hawkins. It was first implemented in 2001 for television purposes in cricket where it displayed the video from 6 different angles.

How does a Hawk-Eye Operate? 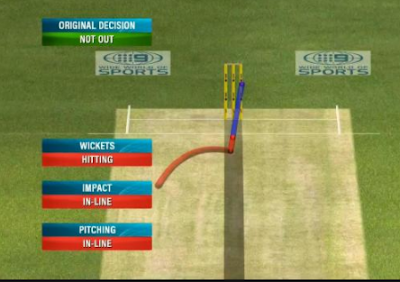 Each one of us has witnessed the flawless contribution of Hawk-Eye in cricket. Many a times there comes a situation in cricket when the decision goes to hands of the third empire, we the get to see a visual in our televisions which shows the whole trajectory of the ball and also whether it would hit the stumps or not. This is nothing but Hawk-Eye in full fledged action.


All Hawk-Eye systems are based on the principles of triangulation.Triangulation is the process of determining position of a point by forming triangles to it from known points. These points are located using the visual images and timing data provided by a number of high-speed video cameras located at different locations and angles around the area of play. The system rapidly processes the video feeds by a high-speed camera. All the data is stored in the predefined game model which contains a predefined model of the playing area and includes data on the rules of the game.

In each frame sent from each camera, the system identifies the group of pixels which corresponds to the image of the ball. It then calculates for each frame the 3D position of the ball by comparing its position on at least two of the physically separate cameras at the same instant in time. Each frame builds the path along which the ball travelled. The system generates a graphic image of the ball path and playing area, which means that information can be provided to judges, television viewers or coaching staff.

When the Hawk-Eye went down

Although Hawk-Eye system has been trusted and embraced in sports like Cricket and Football, its precision in Tennis has fallen short. Its Statistical margin of error or in layman language the difference between actual trajectory and Hawk-Eye trajectory was large enough to criticize its performance. Moreover, its prediction of balls trajectory after bouncing in Cricket has also been questioned by many.

Cricket:
In winter of 2008/2009 ICC installed the Hawk-Eye referral system wherein if the teams were dissatisfied, they could demand referral with Hawk-eye.
Tennis:Hawk-Eye was tested by International Tennis Federation and passed for professional use too. It was used in television coverage for Wimbledon, Queens’s club championship, Davis Club and Tennis Masters Cup.

Others:In Football, Hawk-Eye informs the referee whether the ball fully crosses the goal line or not.
In Snooker when the shots went awry, Hawk-Eye was used to demonstrate the actual shot intended by the player. Moreover, Hawk-Eye was also used in Badminton and Australian Football.

The Hawk-Eye technology came about bringing a revolution in sports. Sports are fairer and the chances of errors in decision have fallen ever since this technology has surfaced. In the end when the human eye misses the Hawk-Eye clenches.

Note: The views expressed here are those of the author's and do not necessarily represent or reflect the views of DOT as a whole.
By Unknown - August 06, 2017