Tourism has been a part of human life since the beginning of the mankind of existence. tourism expanded during the twentieth century and now represents more than a half a trillion dollar industry worldwide and the recent buzz in the industry is space tourism.
Space tourism is a space travel for recreational, leisure& business purposes. The pioneer of the idea is SirRichard Branson in the year 2004.Founder of the Virgin group he founded space flight corporation Virgin Galactic a spaceport which is designed for space tourism. There are different types of space tourism orbital, suborbital and lunar space.
Earlier in the 2000s, the Russian Space Agency took seven paying members of the public into space. It canceled the programme in 2010 when the end of Nasa’s Space Shuttle programme meant the US agency needed seats aboard Russian flights to send its astronauts to the International Space Station.later the private players entered into the sector. The major players in the industry are Virgin galactic founded by Sir Richard Branson, Blue origin founded by Jeff Bezos.space-X founded by Elon Musk.
Soon it won’t only be Nasa-trained astronauts who can experience the wonder of space travel, but us mere mortals too. You won’t need any science qualifications either, as a fully-trained crew will be on hand to make sure your journey goes smoothly.

Virgin Galactic is planning to offer sub-orbital flights to paying passengers aboard their craft, the SpaceShipTwo. Sub-orbital means that you’re not high enough to actually orbit the earth, but as the goal is to pass the 100km line that marks the edge of space, you will technically be in space, and also experience weightlessness.

On 13/12/2018 the virgin galactic sent a space flight, with a rocket motor burn of just 60 seconds, but the mission reached the company's targeted altitude, hitting a peak of 51.4 miles achieving a new record (82.7 kilometers), the speed is nearly three times the speed of sound and the journey was for 14 mins. which it deems meets the requirement for spaceflight. 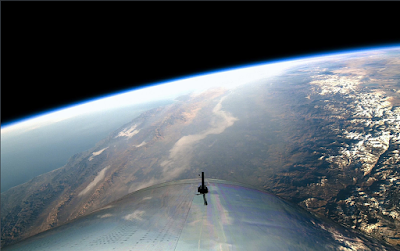 A camera on Virgin Galactic's SpaceShipTwo VSS Unity captured this view of the Earth from over 51 miles (82.7 kilometers) up during a test launch on Dec. 13, 2018, from Mojave Air and Space Port in California. It was Virgin Galactic's first trip to space.

Upcoming projects:
·       Elon Musk announced that substantial deposits from two individuals had been received by SpaceX for a Moon loop flight using a free return trajectory and that this could happen as soon as late 2018.
·       A trip to the international space station
·       Traveling from place to place through space.

“Without change, there is no innovation, creativity, or incentive for improvement.those who initiate change will have a better opportunity to manage the change that is inevitable.”