When Steve Jobs came back to Apple in 1997, the product line then was confusing. When he went to the VP of Marketing and asked him which Computer he would suggest given the requirement of himself, the VP offered 3 different choices. That incident is a testimony to the fact that over the years, the product line of Apple became confusing.

Then Steve Jobs called a meeting of strategy and put forward his thoughts on how the product line should look like going forward and he gave a shocker to the whole team when he said, he's going to kill all the existing products. He absolutely hated people who gave presentations on slides and asked them instead to take a marker and write it on the board because he believed people should know what they are talking about and when they know what they are talking about, they don't need slides to assist them. So in his trademark style went to the white board and drew this simple 2 X 2 matrix which went on to became the one single page of strategy for Apple. The matrix looked like this: 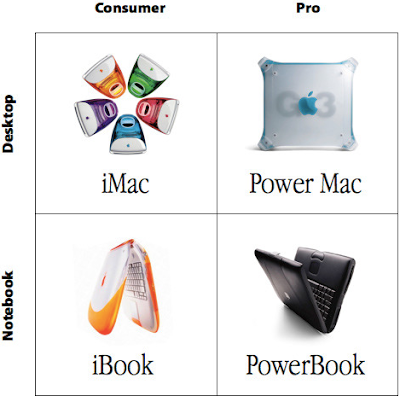 This slide explained the vision for Apple. The need of the hour for them was to eliminate the clutter of thinking users have to go through before they bought a laptop or a desktop from Apple. Steve Jobs felt, this is the way to move forward. There should be one choice for each of the use case: Consumer Desktop, Consumer Laptop, Professional Desktop, Professional Laptop. That's it. No different products for the same use case.

Then Apple started with iMac - the consumer desktop in 1998 and went on to fill the parts of the grid over the years. Now that we have the power of hindsight, we can admire how logical and correct the decision was but for the people who were at Apple, it was a nightmare.

Firstly, unlike many other companies where the teams were formed around function, the teams at Apple are made around products. ie., iPhone has a team, iPad has a team, Mac has a team and so on. So to execute this kind of strategy where in 40 different products are brought down to only 4 needs a lot of management power and consolidation. Management needs to fire people to make this consolidation happen which in itself is a difficult task. They need to identify the right composition for the team so that the power centres are proper.

Secondly, Apple didn't fell in the trap of cost cutting and instead focussed on making great products. Apple is loosing money like crazy when Steve Jobs came back and the logical step for any CEO to do is to fire people, decrease incentives and other bonuses. These kind of strategies not only suffocate people but kills the innovative vigour needed to make a great product happen and as they believe, Apple is made not by a bunch of scientists but a team of Artists! So the focus of Steve Jobs when he came back was always to innovate than cutting down the costs.

Thirdly, it may sound trivial but the right incentive structure is very important for a company like Apple that not just focuses on great products but on all these products working together. In any other company in the same industry the incentive system is based on the performance of that particular division. For Eg, Windows team is incentivised based on the sales of Windows and Office team is incentivised based on the sales of MS Office in Microsoft. But the case at Apple is completely different. Every division receives incentives based on the overall performance of Apple. ie., even iPhone brings two-thirds of profits of all the products combined, Apple TV team and iPhone team are incentivised in the same manner. This decision by management of Apple is really important for 2 reasons:

We can attribute various other factors to why Apple is so successful but their strategy and the way they went about executing the vision which is as important as formulating a strategy, makes them stand apart in the industry. When Steve Jobs said "we think we have the right architecture not just in silicon but in the organisation to build these kinds of products" while introducing iPad 2, (video linked below) this is what he meant!