Most of the people now know or at least have heard about 3-D printing. For those who have not heard of, it is the process of making three dimensional solid objects from a digital file using a 3-D printer. 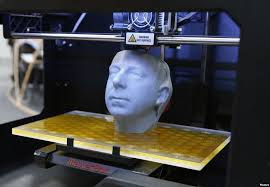 Manufacturing has always played the most important role in all sorts of endeavour of the mankind. Printing dates back to the time when Johannes Gutenberg  introduced printing to the Europe and the World through a printing press thus enabling the dissemination of knowledge throughout the world in the form of Books. At that time printing was done on 2 dimensions however, printing has grown by leaps and bounds to manifest into its present form known as 3-D printing.

A 3-D printer can make copies of any object in 3 dimensions unlike a conventional printer thus making even the complex processes easier many times. 3-D printing is achieved through additive manufacturing. Additive process creates objects by laying down successive layers of material till the object is created.

Nearly three decades ago before machine parts, toys, artificial organs were created engineer Charles Hull printed a small cup using a plastic material and ultraviolet light. He named this process stereo-lithography and got it patented in 1986. Stereo-lithography is the process for creating prototypes in a layer by layer fashion using photo polymerization ,a process by which light causes chain of molecules to link together forming polymers.It is one of the many methods for creating 3-d printed objects.

Slowly and slowly this new technology started gathering attention of manufacturers for use in prototyping. Chuck Hull founded 3-D systems in 1986 to sell 3-D printers to  the likes of Mercedes Benz  and General motors. Competition rose in 1989 when Stratasys, another 3-D company was founded. Stratasys used Fused deposition modeling which layer-by-layer building of the object from the bottom up by heating and extruding thermoplastic filament through a nozzle of the 3-D printer which is called an Extruder in 3-D printing industry.

3-D systems use stereo-lithography while companies like Stratasys employ fused deposition modeling technology. For a more precise and detailed objects laser based stereo-lithography process is used. Laser based process employs usually a UV laser which is focussed on to a vat of photopolymer resin. Computer aided design softwares are used to prepare designs of the object to be printed after which UV laser is used to draw the design on the photopolymer surface.Projection based lithography(DLP) employs projector below the resin tanks to project the layers at once. DLP can print objects finer than even Laser based stereolithography however its capacity is limited in terms of volume.Whatever the processes may be but they all are being used for one or the other purpose.

3-D printing today is being used from creating parts of planes to creating 3-D printed houses. It is also being used for creating artificial ears,kidneys,Prosthetic Hands with the help of patient's tissues thus opening new doors for such patients while at same time reducing the grave possibility of rejection by the body such as in case of Kidney transplants. 3-D printing has also been used lately to print eatable items thus bringing more options for the customers. 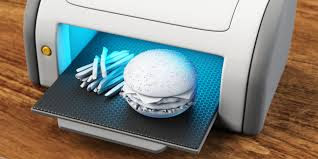 Parts used in space shuttles are today being created using 3-D printing technology. 3-D printers are today being manufactured for the households thereby enabling the customers to print whatever they need, designs for which are  available on the internet.

However, with positives every invention brings with itself some negatives as well.Recently an activist Cody Wilson 3-D printed a gun which created a lot of fuss in the media about the possible threats which 3-D printing brings with itself such as the existence of the design of a gun on every computer.