Hello, my name is Sophia. I’m the latest robot from Hanson Robotics. I would like to go out into the world and learn from interacting with people. Every interaction I have with people has an impact on how I develop and shapes who I eventually become. So please be nice to me as I would like to be a smart, compassionate robot. I hope you will join me on my journey to live, learn, and grow in the world so that I can realize my dream of becoming an awakening machine. Please connect with me and be my friend.

The above lines are what you get to read when you visit the site of the most advanced humanoid robot till date - SOPHIA.

Definitely when it comes to robots, Sophia would be regarded as an epitome of beauty. The fact that we know, we are living in a world where things have become highly automated , and there is no doubt, that not far away are those days when things will become very much similar to what we have seen in movies like EX-MACHINA, i-ROBOT etc.

Sophia absolutely flouts the conventional thinking of what a robot’s appearance should be like. Getting inspired from Audrey Hepburn, Sophia embodies Hepburn’s classic beauty: porcelain skin, a slender nose, high cheekbones, an intriguing smile, and deeply eloquent eyes that seem to change color with the light.

David Hanson, founder of Hanson Robotics is the man behind the creation of Sophia. He simply creates magic out of machine, turning everything which we considered as science fiction earlier into “reality”.

After having worked as one of the “Imagineers” at Disney, his aspirations were always sky high, which involved actualizing genius machines which would have three distinctive human traits that must be developed alongside and integrated with artificial intelligence. Those traits consisted of -creativity, empathy and compassion.

Being the latest and most precocious robot of Hansen Robotics, Sophia is a media darling, appearing on one of the top fashion magazines. Be it banking, insurance, auto manufacturing, property development or media and entertainment, she has shown her potential in business in her meetings with the key-decision makers across the fields leaving no stone unturned. 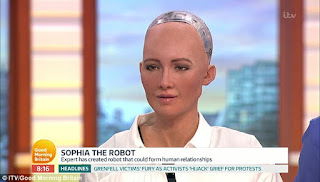 Sophia is an evolving genius machine. Her incredible human likeness, expressiveness, and remarkable story as an awakening robot Over time, her increasing intelligence and remarkable story will enchant the world and connect with people regardless of age, gender, and culture.

Sophia is a sophisticated mesh of robotics and Chabot software, which does not have the intelligence to give witty responses like it does while she interacts. It can be programmed to run different codes for different situations making it more of a user-interface than a human being.

Typically, the software can be prorated into three configurations:

1) A research platform for the team’s AI research-Sophia doesn’t have witty pre-written responses here, but can answer simple questions like “Who are you looking at?” or “Is the door open or shut?”

2) A speech-itemizing robot-Sophia can be pre-loaded with the text that it will speak, and then use machine learning to match facial expressions and pauses to the text.

3) A robotic chatbot-Sophia, additionally frequently runs a dialog system, the place it could take a gander at people, tune in on the thing that they say, and pick a prewritten reaction, in view of the thing that the representative said, and different factors assembled from those on web such as “crypto currency value”.

In the month of October 2017, at the Future Investment Initiative in Riyadh, the Saudi Arabian government announced it had granted citizenship to Sophia. She told delegates at the Future Investment Initiative: “I would like to thank very much the Kingdom of Saudi Arabia. This is historical to be the first robot in the world to be recognized with a citizenship”.

There were lot of critic comments that came up with the citizenship of the very first humanoid robot. The strongest reaction was those of, one of the world’s most influential innovator ELON MUSK’S, who believes that AI would possess threat to humans.

Would Sophia’s citizenship hold up in court in some strange future legal precedent that will come back to haunt us 10 years from now? Was the whole thing a depressingly empty, unironic attempt at publicity for Sophia’s human captors? Almost certainly yes, but only time will tell about how international law will handle the advent of AI-powered populations, a future that seems more certain to arrive with each passing day.

Would this decision of granting Sophia the citizenship be a backfire to Saudi Arabia and the rest of the world? Will AI seriously pose threat to humans as in shown in science fiction movies? How will the international law deal with the advent of upcoming AI fueled population?

Time only will be able to answer the aspersions cast upon Sophia, the humanoid robot and its upcoming generations.

Note: The views expressed here are those of the author’s and not necessarily represent or reflect the views of DoT Club as a whole.
By Aisha Padhi - November 26, 2017