"How building an application for AAVEG delivered significant operational excellence for the club VAPS?"

(This article was written on behalf of DOT Club by Vaibhav Gupta for "Kaizen - The Official Operations Club of IBS Hyderabad" which won second prize in inter-club  write-up competition 'OPERA'.) 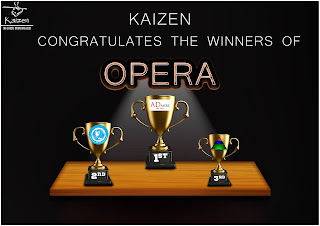 AAVEG – Guts and Glory, the event that truly signifies its title. When trailer was released it send thrills and goosebumps to the viewers.  When DOT club developed the App, it was well appreciated by juniors, seniors and even many faculties of IBS. App delivered lots of features like About the event information, Event details, POCs of every event, LIVE Scoreboard, List of participating colleges, Results, Contacts, Maps & videos. Team VAPS planned the event one month before the event date. Everything was planned and set. Two main problems that Team VAPS faced was how they can reach to around 3000 people in minimum time? Secondly, the concern of Team VAPS was how they can coordinate between different teams of various colleges playing different sports which were scheduled at different time? They needed a central platform that can provide all things in one place plus it should have minimum cost. Operational Excellence was the need of time and the answer was use of technology. DOT club which was official technology partner of Team VAPS since last three years came up with a solution of developing a Web App which will provide all information access in one go. With technical team of DOT club experts, engineers and technical graduates, they went on research to develop app in an economical way. The expert team got success and they were able to make it after 20 days. App was developed and SCOREGURU was developed by using software which was a LIVE SCOREBOARD that provided instant real time updates of 10 sports namely Basketball, Counter Strike, Swimming, Squash, Table Tennis, Lawn tennis, Football, Badminton, Throw ball and Volleyball. 29 members were employed at each end that included field score updaters, backend support and score display management team. Mobile was used to update the scores of the fields to the backend servers and backend support team. It made it as the basis of Performance Management.

Strategy deployment & process was done by preparing team of two members which provided 4 hours shifts in each game. All members were equipped with smart phone and an app on their mobile that enabled member on field to update live scores on SCOREBOARD which were placed near Mess 1, Mess 2 and Pasha’s den. After getting the live feeds from Scoreboard, backend team consisting of 3 person updated the respective scores on AAVEG app. Leadership role was done by DOT club president Ankit Gupta and On-field coordination and supervision, resource allotment was done by General Secretary DOT Club Sumant Sharma. Three overall POCs were made to ensure smooth flow of the process and correct things on time. Hierarchical structure and close supervision made the impossible, possible. This made it the foundation of High Performance Work Teams. Hence AAVEG which was a three days event with lots of complexities was able match the need of participants and viewers. Team VAPS got competitive advantage over other club’s event as they save a lot of cost by minimizing the operating cost that would be incurred by using information channels and saved a lot of time which was the most important factor for VAPS to conduct so many activities in such a short duration. Operational excellence can be achieved and sustained with right attitude, the right mindset, and the right competencies. Hope future of IBS events will be more efficient by use of technology.